Yara Bayoumi at Reuters reports on the complicated minuet being danced by Russia, the Syrian Air Force, and the United States.

The Syrian Air Force was bombing positions of the Syrian Democratic Forces, a U.S. euphemism for the leftist Kurds of the YPG. The U.S. Air Force shot down the plane (apparently the pilot was able to eject and survive). The U.S. is depending on the Syrian Kurds to take Raqqa city, where they already hold a few neighborhoods. It is the so-called capital of ISIL (ISIS, Daesh). Of all the military forces in the region, only the Kurds have been willing to provide ground forces to roll up ISIL in eastern Syria, with the help of U.S. and coalition air support. If the U.S. proved unable to protect the YPG Kurdish fighters from the regime and from ISIL, they would peel off.

The Kurds are generally considered neutral as between the Bashar al-Assad regime and the mostly Sunni fundamentalist rebels challenging him. The Syrian Kurds want at the least more “states’ rights,” from the regime, but for the moment they enjoy semi-autonomy given that the regime is weak and bogged down in the fight against the rebels. The YPG Kurds have some Arab allies, but most of the fundamentalist Arab militias hate them, partly for being Kurds and partly for being secular leftists.

It is not clear why the Syrian regime chose to bomb the Kurds. It likely fears that the latter are taking over Raqqa province permanently, despite its large Arab population. After ISIL is defeated, Damascus is not going to be sanguine about an expanding Kurdistan that permanently detaches large swathes of Syria from its government. The U.S. military make be sanguine about a Kurdish semi-autonomous zone stretching south from Hasaka all the way down to the borders with Jordan and Iraq. But this development is not acceptable to the Syrian regime.

The development is also not acceptable to Turkey, which has also bombed the Kurds allied with the U.S., despite Turkey being a member of NATO and a U.S. ally. It is possible that Ankara and Damascus are coordinating in hopes of rolling back up the Kurdish fighters as the war winds down and the U.S. becomes restless and leaves.

The problem with the U.S. shooting down that Syrian plane is that the Syrian Air Force is allied with the Russian Federation, and the Russian Aerospace forces often fly alongside the Syrian pilots.

The Russians complain that the U.S. did not warn them before bombing in east Syria, and they should have under the agreement between Washington and Moscow.

And, Russia announced that it would possibly shoot down any U.S. air craft operating in western Syria.

Those are about the most dangerous words I’ve heard in decades, since the era of the Cuban missile crisis or the dark Cold War film Fail Safe (1965).

Regarding what is happening “on the ground” in Syria, it is necessary to completely respect the sovereignty and territorial integrity of Syria. So any actions “on the ground” – and there are many participants, including those who conduct military operations – must get Damascus’ approval. (Source: TASS news agency, Moscow, in Russian 0555 GMT 19 Jun 17.)

For its part the U.S. military issued a statement saying it has no ambitions in Western Syria, doesn’t intend to fight there, and is not intent on ousting Bashar al-Assad: 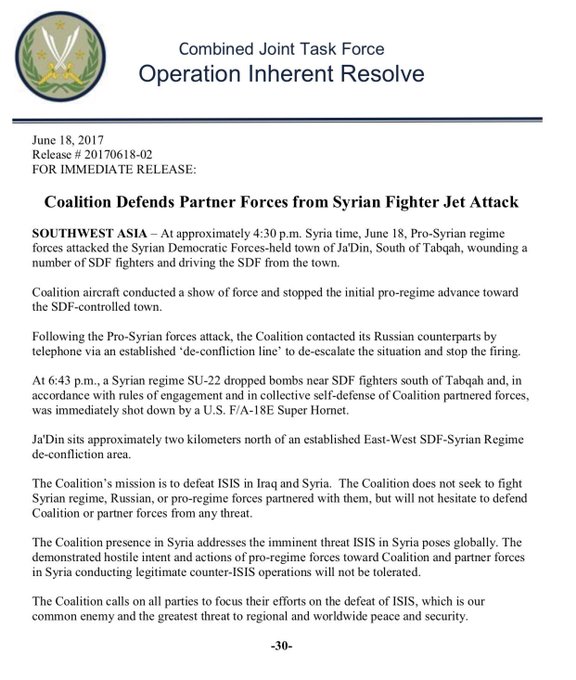 This is an unbelievable statement. Policy implications are profound pic.twitter.com/HyrAxaIE8P

The U.S. said late Monday that it would try to reestablish “deconfliction” with the Russians. A lot is riding on whether they do.

Ultimate rightwing transgression: the mockery of politics as a preposterous joke

Tax the rich? We did that once 

Hype about Democrats passing the torch: Don’t get fooled again

As corporations enjoy record-high profits, experts urge Congress to ‘rein them in’

Blessings and curses of a losing Trump finale: A boon to Democrats could hurt the country, if not mankind

Does Elon Musk have a right to destroy Twitter?

Robert Reich - December 5, 2022
Do we really think that the super-wealthy should be allowed to control so much wealth and wield so much influence?

Why does our skin wrinkle in water?

Omala Snyder - December 5, 2022
Mark Changizi’s study offers a scientific and anthropological explanation for a phenomenon many take for granted.

Shane Coffield and James Randerson - December 5, 2022
Without improvements to the current system, we may be underestimating our net emissions, contributing to the profits of large emitters and landowners and distracting from the real solutions of transitioning to a clean-energy economy.

Cristen Hemingway Jaynes - December 5, 2022
“Every American — regardless of where they live, their income, or the color of their skin — deserves access to safe, reliable drinking water.”

Hype about Democrats passing the torch: Don’t get fooled again