Russia is not going to yield its sphere of influence in Syria to Donald Trump or anyone else. Russia has all but won the Syrian War as we speak. There is no longer any feasible pathway for the rebels to take the capital of Damascus. The non-ISIL groups have lost all major urban areas except for Ghouta near Damascus. They are bottled up there and in rural northern Idlib province, and likely the regime will overwhelm them in both places over the next year, with Russian air support. ISIL itself is on the verge of losing everything in Iraq and of being rolled up, over the next year or two, in Eastern Syria.

“Kremlin spokesman Dmitry Peskov . . . said . . . “The American side has thus demonstrated its complete unwillingness to cooperate on Syria in any form or take account of each others’ interests and concerns. . . The return to pseudo-attempts to settle [the Syrian conflict] in the spirit of reciting ‘Assad must go’ mantras cannot bring anyone closer to political settlement in Syria,” he said. Peskov was commenting on remarks by French Foreign Minister Jean-Marc Ayrault, who earlier called on Russia to distance itself from Assad.”

I think we should take Moscow seriously on this.

What can be said is that there are four major local forces in Syria: 1) the western urban regime stretching from Damascus to Latakia and Aleppo; 2) the fundamentalist rebels, whether moderate Muslim Brotherhood or Salafi Jihadis such as the Freemen of Syria or the Syrian Conquest Front; 3) The YPG leftist Kurds in the northeast and 4) ISIL. 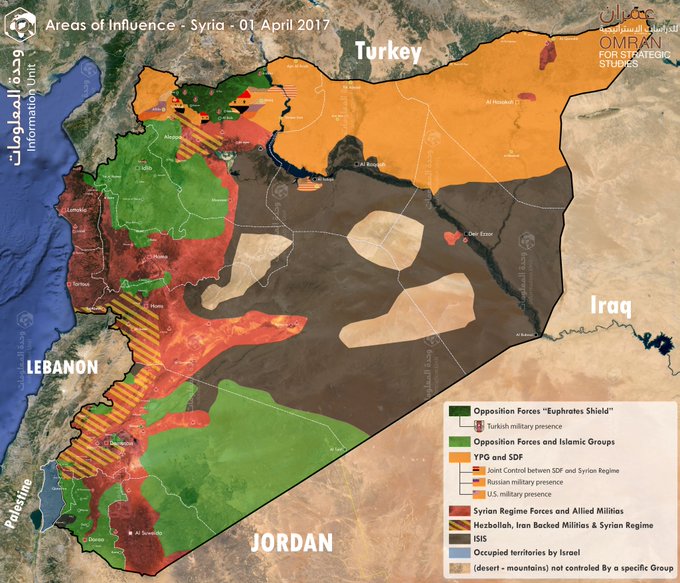 The West and Northwest are a Russian sphere of influence, and the Bashar al-Assad regime and the Russians have, as I said, all but defeated the fundamentalist rebels there. (There are non-fundamentalist rebels, especially in Ghouta, but they frankly have never amounted to anything on the battlefield). The regime’s occasional use of poison gas is intended as a force multiplier, since at a low 50,000 or so men under arms they can barely control the country, much less take back big swathes of territory, even with intensive Russian air support. The other force multiplier is total war tactics such as starving out civilian populations among whom guerrilla groups hide out, or deliberately hitting hospitals and other essential service-providers in rebel areas. While the regime may become more cautious about the use of gas, it may simply double down on indiscriminate bombing.

A caution: on the map above, the reddish areas under regime control look geographically small. They actually contain about 75 percent of the population.

The east is an American sphere of influence, where the U.S. is backing leftist Kurds to take on ISIL.

There is also a small strip of land north of Aleppo that is a Turkish sphere of influence, where fundamentalist rebels are still operating, but it doesn’t amount to much and Turkey backed off challenging either Russia or the U.S.-Kurdish alliance in any frontal way.

There simply is not much money to be made in Syria. Before the war it had a small population of 22 million. Its gross domestic product of $77 bn is less than that of the island of Puerto Rico and less than half that of Peru, one of the poorer countries in the Western Hemisphere.

Syria was pumping about 400,000 barrels a day of petroleum, which is next to nothing. One fracked field in North Dakota does that. Saudi Arabia does 10 mn b/d and Iraq does 3. Nor is the conflict about pipelines. Nowadays both oil and liquefied natural gas can be inexpensively exported by supertanker and while a pipeline might be nice it wouldn’t be worth fighting a war over.

Syria is important to Russia because:

Syria on the other hand is not important to the U.S. Syria’s alliance with Iran makes it inconvenient for both of the major U.S. allies in the region, Saudi Arabia and Israel. But the Israeli security establishment is divided about whether it is better to leave al-Assad in power or to welcome the Sunni fundamentalists into Damascus in order to weaken the Shiite Hizbullah in Lebanon. After all, an al-Qaeda state next door would be much worse than a little-isolated militia like Hizbullah. Saudi Arabia has no such reservations, but its proxies in Syria have mostly been defeated and it can’t do anything more there except play spoiler and encourage what will amount, after the war is over, to mere terrorism. Aside from the Iran consideration, the U.S. has no stake in Syria except to deprive Daesh/ ISIL of a base there from which to attack Europe. But the U.S. cannot defeat ISIL without de facto strengthening the al-Assad regime.

All this is why Russia will remain in Syria and will have most of it as its sphere of influence. Russia has clear motivations and clear goals there, a strong ally with most of the population under its control, and a practical plan for accomplishing them, which has worked well if sanguinarily so far.

In contrast, the U.S. has no obvious motivation to be in Syria except fighting Daesh. Its policies are therefore muddled. It is damaging its relationship with a big important country, Turkey (pop. 78 mn., GDP $800 bn), by its alliance with the small PYD Syrian Kurdish population of some 2 million, for the instrumental purpose of rolling up Daesh. Maybe the military-industrial complex in the U.S. would like a war just to make some money, and maybe the Neoconservatives would like a war to contain Iran. But neither of them is likely to be able to dictate to Trump, who likely hasn’t given up on better relations with Putin and doesn’t need either of those groups to be reelected.

My guess is that the Tomahawk strikes were impulsive and a one-off. The Russian-dominated status quo is not significantly affected, and there isn’t an early prospect of it so being.

How terror came home and what to make of it

Across Africa, water conflict threatens security, health, and the environment

Graham Peebles - November 29, 2022
"Act now with environmental responsibility at the core of ones daily life; act now to force governments and businesses to respond, or look around in ten years and see ashes in your hands."

Inequality kills. But we can stop the killing. 

Sam Pizzigati - November 29, 2022
So argues a gripping new book from an activist physician who’s helped divine the keys to long and healthy life.

Brett Wilkins - November 29, 2022
"Biden is siding with corporate rail bosses over the rank-and-file workers who voted against this agreement," said one progressive commentator after the president urged lawmakers to take action to force through a deal without paid sick leave.

Tom Conway - November 28, 2022
“He’s there to work. He’s not there to make the backdoor deals. I wish we could have more senators like that.”