You’ve been avoiding this for a long time.

You prefer to remember the times he took you to the park, that amazing camping vacation a few summers back, the funny things he often says at the dinner table, that beautiful dog he gave you on your 12th birthday.

Dad is an alcoholic and he beats mom.

Do you hate him?  Do you reject him as your father?

No . . . but things have to drastically change and very soon.

This is not actually the story I wish to tell.  I’m merely drawing a parallel.  I’m talking about dealing with denial, facing reality, accepting responsibility, taking action.

There are many situations in life for which the above scenario is a metaphor.

The parallel I’m making is the relationship between a citizen and a government gone mad.

We’ve avoided it for a long time.  We prefer to think of America as a beacon of hope in the world, the fountainhead of truth and justice, a purveyor of democratic values and human rights.

As Martin Luther King, Jr. said in his monumental, myth-shattering speech — the one that probably got him assassinated — at Riverside Church in New York City on April 4, 1967:

“The greatest purveyor of violence in the world: My own government, I cannot be silent.”

I won’t go into the long history of American aggression.  Whole books have been written which detail our gruesome heritage of merciless wars, the most notable being Howard Zinn’s classics, A People’s History of the United States and the more recent A People’s History of American Empire.  Nor will I indict the U.S. foreign policy apparatus for its gross deceptions and hypocrisies, elucidated with unparalleled clarity and candor in William Blum’s excellent work, America’s Deadliest Export: Democracy.

I won’t talk about the millions of human carcasses piled on top of more carcasses, the result of countless war crimes and merciless military strategies which place no value on human life, whether the victims are in uniform or innocent civilians.  I’ve realized that the scale of the horror is such that its incomprehensible to most good decent citizens.  I myself when confronted by figures like 3 million Vietnamese killed, 1.5 Iraqis killed, on and on, find my eyes glazing over in the deluge of zeroes.  I literally cannot grasp these numbers and apply them meaningfully to the grief and physical suffering which they are supposed to somehow encapsulate.

Let’s instead look at a few simple very recent facts and try to put them in perspective.

Fact 1:  The U.S. is not officially at war with any other country at this time. 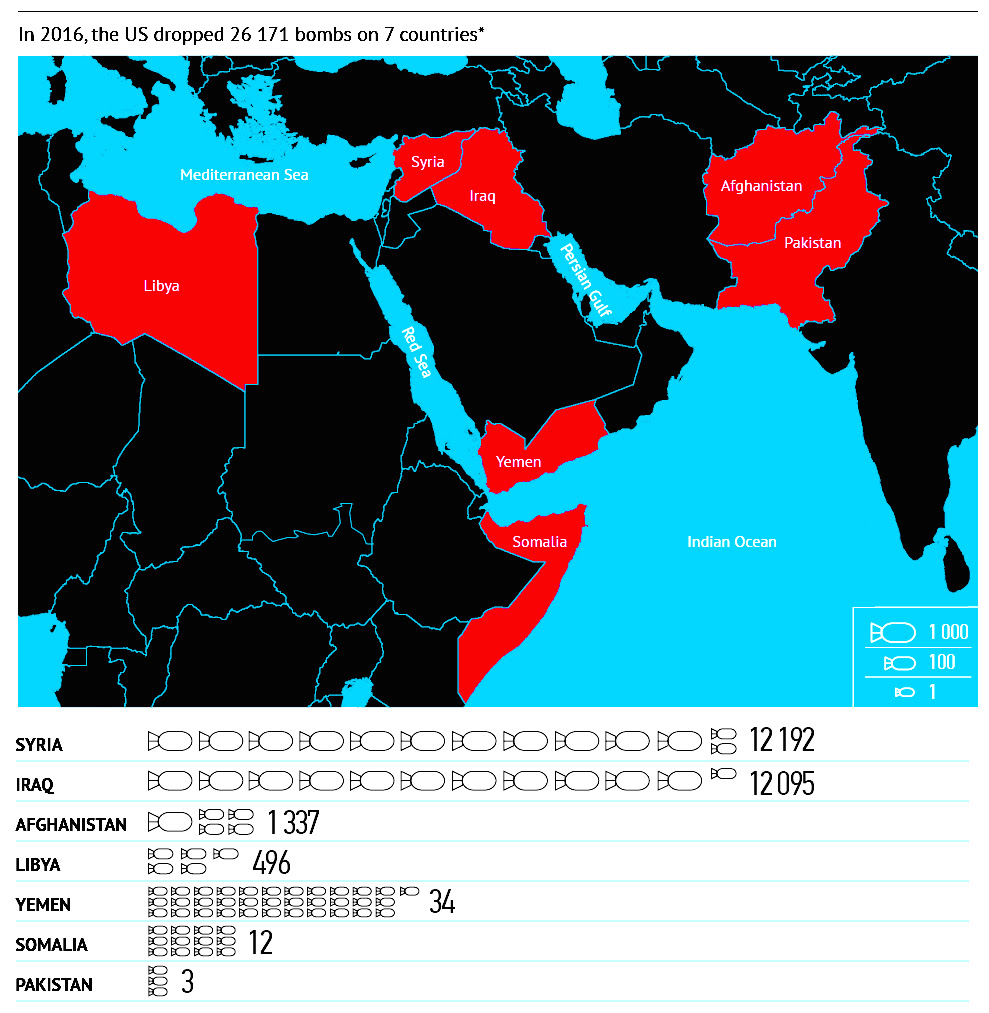 Mind you, these are the official figures.  Who knows what the real totals are?

Rigorous studies have made it very clear that well over half of the casualties of current warfare are civilians.  In what are called ‘internal conflicts’ — like Iraq, Afghanistan, Libya, Syria, Yemen, Somalia — which now are by far the most prevalent form of military conflict, the percentages can be as high as 90% civilians.  These violent clashes are typically fought by proxies. In all of the countries just listed, the aggressors are mercenaries paid by the U.S. and its allies to enter and destroy a country in what is then deceptively characterized as a civil war or “people’s uprising”.  There is very disturbing recent evidence, for example, that the U.S. through CIA back channels has been funding ISIS, Al Nusra, as well as other extremely barbarous terrorist groups in Iraq and Syria.

By the way, that money they withhold from your paycheck?  Or that quarterly tax payment you regularly make?  Think about it.  This is where a big chunk of your tax dollars is going.  You’re paying for this.

Does any of this make my point a little more comprehensible?

America can say with great pride that what it does, it usually does very well.

When we put our minds to something, we pull out all the stops.

Now we can put cold-blooded killing right up there in the Top 10.

Beware!  We are a nation of relentless savagery!

Then again, a lot of countries already know this.

I’ve said this many times before and I’ll keep saying it until people get it . . .

Peace will not come from the top.  There are too many incentives and rewards in our corrupt corporate kleptocracy to keep the wars going and the wheels of the defense industry churning out more mechanisms of death and destruction.

It is only when we everyday citizens finally have had enough of the carnage, enough of the military waste, enough of the chest-beating imperialism which makes us less safe, enough of the empty rhetoric which claims to embrace the noble virtues but is just more deception in the name of war and imperial conquest, it is only then that America will turn around.

Maybe there are detailed plans out there somewhere to mobilize the good decent citizens of this country.  I haven’t personally seen any.  So here is mine.  Yes, it is outside-the-box, some would say radical, extreme.  But if we are the nation we claim to be in the world and in the eyes of God, isn’t cruelly and senselessly dropping 26,171 bombs on mostly innocent people extreme and radical?

My plan demands very little of us individually.  We don’t have to march on the capital or mount a revolutionary insurrection.  Despite that, it could make all the difference in the future we leave to our children and our children’s children.  All that is really required is that we listen to the voice of reason and stand strong.

Tech billionaires are actually dumber than you think

Choosing life in a pro-violence society

Low-paid workers are unionizing. Corporations are spending a ton to stop them.

Prospects for a republic beset with disunity  

This one thing made Alex Jones stop lying

Tech billionaires are actually dumber than you think

Sonali Kolhatkar - October 4, 2022
It turns out that many of today’s billionaires are selfish, lonely men fantasizing about how they will survive the end times they have played a part in creating.

Low-paid workers are unionizing. Corporations are spending a ton to stop them.

Choosing life in a pro-violence society